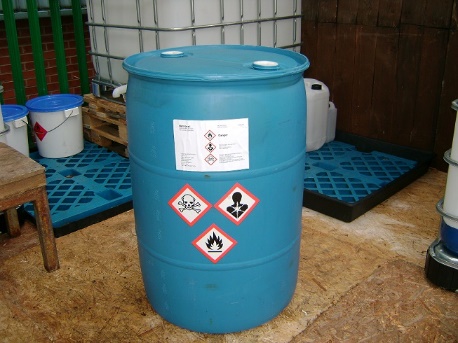 Methanol, also known as methyl alcohol, wood alcohol, wood naphtha, methyl hydrate, or wood spirits, is achemical with the formula CH3OH (often abbreviated MeOH). Methanol acquired the name "wood alcohol" because it was once produced chiefly as a byproduct of the destructive distillation of wood. Modern-day methanol production occurs in a catalytic industrial process directly from carbon monoxide, carbon dioxide, and hydrogen.

Methanol is the simplest alcohol, and is a light, volatile, colorless, flammable liquid with a distinctive odor very similar to that of ethanol (drinking alcohol). However, unlike ethanol, methanol is highly toxic and unfit for consumption. At room temperature, it is a polar liquid, and is used as an antifreeze, solvent, fuel, and as a denaturant for ethanol. It is also used for producing biodiesel via transesterification reaction.

Methanol is produced naturally in the anaerobic metabolism of many varieties of bacteria, and is commonly present in small amounts in the environment. As a result, there is a small fraction of methanol vapor in the atmosphere. Over the course of several days, atmospheric methanol is oxidized with the help of sunlight to carbon dioxide and water.

Methanol also forms in abundant quantities in star forming regions of space, and is used in astronomy as a marker for such regions. It is detected through its spectral emission lines. Methanol burns in oxygen, including open air, forming carbon dioxide and water:

Methanol ingested in large quantities is metabolized first to formaldehyde and then to formic acid[12] or formate salts, which is poisonous to the central nervous system, and may cause blindness, coma, and death. Because of these toxic properties, methanol is frequently used as a denaturant additive for ethanol manufactured for industrial uses. This addition of methanol exempts industrial ethanol (commonly known as "denatured alcohol" or "methylated spirit") from liquor excise taxation in the US and some other countries.